The cultural association Rimazùu – Society for Riomaggiore Language and Culture was founded in 2010, ideally understood as the continuation of the work of transcription of the dialect and the oral tradition of Riomaggiore started by Siro Vivaldi with his dictionary.

The fundamental aim of our association is the protection of the language and culture of the community of Riomaggiore. More generally, its purpose is the preservation, enhancement and promotion of the linguistic, cultural, social, environmental, historical and artistic heritage of Riomaggiore and its surroundings.

«Rimazùu» is the name by which Riomaggiore has always been called by its inhabitants, i.e. the endonym of the village in the local dialect of Ligurian language, the mother tongue of generations of the people of Riomaggiore. The emblem of the association is St. George’s Cross, the flag of Genoa and Liguria.

In 2015 the association fostered the birth of Cinque Terre Summer School in partnership with the Municipality of Riomaggiore. In addition to the school, it has promoted the establishment of a publishing house, Edizioni Cacinagora, and of a vernacular band, the Grandi & fanti. The musical group won many awards, including the first prize, at the St. George Festival of Ligurian Language Song. 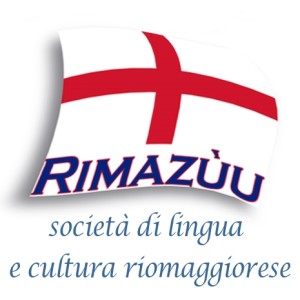